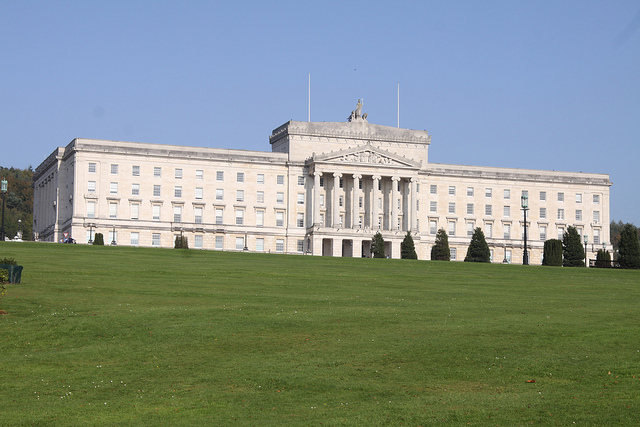 You might think about contacting your local representative for some action. You’ve heard that some MLAs like cycling, or you’ve cringed at Assembly Members embarrassing themselves during Bike Week. Transport infrastructure and road safety are devolved matters, so the Assembly gives an opportunity for local issues to be debated, and local decisions taken.

This information has been obtained through the fantastic NI Assembly AIMS Portal. NI Greenways has no political affiliations or bias – the results are simply a matter of checking the public record of our political representatives. It makes no comment on any party’s manifesto or general record on cycling, or the effect of political machinations within the Assembly or Executive influencing results.

Award for the most engaged MLA on cycling issues

By some distance, Peter Weir MLA (DUP, North Down) has asked the most questions on cycling issues. Clearly Peter is passionate about cycling, as demonstrated by his 23 questions since September 2011 on an impressive range of issues: road and junction safety for cyclists, dedicated budget allocation, increasing rates of cycling, safe cycling to schools and education, KSI rates, driver education in cycle awareness, and setting a range policy targets.

This included questions not just to Danny Kennedy, Minister for Regional Development (Roads capital investment and maintenance) and Alex Attwood, Minister of the Environment (Roads safety promotion) but also to Edwin Poots, (DUP) Minister for Health, Social Services and Public Safety, on that department’s plans for increasing cycling uptake as a means of improving public health.

Award for the political party most engaged on cycling issues

The DUP come out on top again, understandably given Peter Weir’s prolific record. But even taking out his personal contribution, the DUP would have still have tabled almost twice as many cycling questions as their nearest challengers, the Alliance Party. The SDLP were a close third with 11 Assembly Questions.

Sinn Féin (one question) and the Ulster Unionist Party (four questions) have unimpressive records on Assembly cycling questions in the current session. While understanding the realpolitik of having a UUP Regional Development Minister as part of the five-party NI Executive (none of the four UUP questions were directed at Danny Kennedy) this is still a very poor return from the second and third largest Assembly parties respectively.

Special commendation:
The Green Party asked 9% of all cycling questions – no mean feat for Steven Agnew, as the sole party representative in the Assembly.

Constituency with the best representation on cycling issues

There appears to be a bun fight for the most cycle aware MLA within North Down. Out of a total of 108 Assembly members, just four MLAs from this one constituency asked almost half of all cycling related questions.

For context, North Down is one constituency out of 18 here, or just 5% of the total population of Northern Ireland. Again Peter Weir’s contribution skews the figures, but even removing all DUP questions from this constituency and it would still manage second place.

Several AQWs showed important local cycling issues in North Down, such as the repeal  of council ‘no-cycling’ bye-laws within certain designated areas.

There is a slightly troublesome aspect to this geographic breakdown, involving the perception of cycling, and cycle commuting, in Northern Ireland as a predominantly middle aged and middle class (and male) activity. Almost 3/4 of questions on cycling came from three of the most affluent areas of Northern Ireland. While trying not to draw too many conclusions from this, it’s important that investment in cycling measures benefits all sections of society.

The usual Roads Service response to questions on its commitment to cycling investment s is seen in response to AQW9540 from Peter Weir:

“In the 10 year period including this financial year, Roads Service will have invested almost £9 million in the provision of 225kms of cycle lanes.”

This seems impressive, but further probing by MLAs reveals the problem with cycling investment in Northern Ireland. Two questions ask for a five year breakdown of cycling investment within Roads Service total budget, AQW7075 from Steven Agnew and AQW10961 from Peter Weir.

To further illustrate the problem, total roads expenditure was £110 per head of population in Northern Ireland in 2010-11. Cycling expenditure was 18p per person. Compare this with the Netherlands where cycling investment is at a level of €30 per person, and you see how committed DRD is to cycling as a means of transport.

“To ask the Minister for Regional Development for his estimate of the percentage of cycle trips that should be made by 2020.”

“To ask the Minister for Regional Development to list all the dedicated cycle paths, which are separate from a road or pavement, that have been provided in the last five years; and the dedicated paths that will be provided over the next five years.”

To summarise the answer – none in five years, and no details of any future plans.

“To ask the Minister for Regional Development whether he is aware of any countries in Europe with a lower percentage of trips made by bicycle than Northern Ireland.”

To summarise the answer – none. But good to see the issue is being raised – see other pages on this blog for ideas.

*Special award for Outraged Motorist MLA of the year

Of the 78 questions in relation to cycling, 77 were ‘positive’ in nature – regarding cycling safety, modal shift, making it an attractive transport option. Just one question was ‘negative’, AQW2604 in September 2011:

“To ask the Minister for Regional Development whether cyclists are bound by the same laws as motorists, particularly in relation to traffic lights; and whether they can be fined or prosecuted for breaching these laws.”

In one dashing question Lord Morrow managed to demonise the most vulnerable 1% of our road users, and demonstrate a worrying lack of personal knowledge of the rules of the road. And to answer this probing question, the heavy wheels of a full departmental AQW response were set in motion, requiring time-bound research by civil servants, personal attention from the Minister, Assembly time for a Ministerial response, and a wad of public money associated with all those things. And the answer –available by flicking through your copy of the highway code – yes!

“…when developing and implementing the cycling strategy and cycle network…Roads Service continues to liaise with various interested bodies, such as Sustrans, Travelwise, Department of the Environment’s Road Safety Branch and Translink…”

So when the government body responsible for Northern Ireland’s roads needs views, expertise and guidance on what’s best for cyclists, it consults three other government bodies, and Sustrans. Shocking. How many of these policy experts in government actually cycle to work every day?

“The Northern Ireland Road Network, which has been developed over many years, must serve many different purposes, such as the movement of freight, cars, goods vehicles, pedestrians and cyclists. When a road scheme is being developed, the needs of cyclists and pedestrians are taken into account in order to provide high quality cycle pedestrian facilities, where possible.”

Two highly instructive sentences. Maybe unwittingly, the Minister lists three vehicle types ahead of vulnerable users in our roads strategy. Roads for vehicles, not people. Secondly, measures to improve infrastructure are on a ‘where possible‘ basis, or again ‘vehicle comes first‘ on our roads. We see this in our piecemeal cycle lane network, or our dangerous pedestrian junctions and unwelcoming pavements.

The one lesson Northern Ireland (with particular reference to Belfast and urban centres here) refuses to take from successful ‘living cities’ such as Amsterdam, Copenhagen and more, is that road strategy and infrastructure needs to be guided by a ‘people first‘ principle, not as the afterthought when roads are designed for faster and greater vehicle traffic flows. This is the crux of the culture change required at DRD Roads Service.

They work for you

While not all parties, MLAs, or areas of Northern Ireland, seem to be particularly moved to raise cycling issues, there is a small band of public representatives doing some very good work. Is it time to contact your local MLA and press them to start asking the right questions on your behalf?