The most interesting thing to happen to Belfast cycling this year hasn’t happened yet. The new cycling unit in the Department for Regional Development will probably get up and running in early 2014. It promises a new approach to government investment planning, embedding cycle-proofing across all departments to -prevent missed opportunities. Of course, it also means our cycling future is in the hands of the Department that brought you Cyclesaurus.

So let’s get the new Cycling Unit off to a flying start with some practical ideas which can make a big impact.  And while we’re at it, some ideas for Belfast City Council, active travel organisations, Translink and private businesses too. Regular cyclists’ practical expertise is undervalued, so feel free to pile in to the comments section. Here is your starter for ten..

A major problem for many people commuting or visiting the city centre for shopping or a coffee is the lack of safe parking. If you’re not confident that your bike will be there when you return, you’re much less likely to cycle in the first place. Belfast has plenty of commercial space available and growing demand for cycling facilities – why not open a cycle hub right in the middle of the city? Top up the income by offering services like bike maintenance, cleaning, paid secure parking, coffee, craic etc like the McDonalds Cycle Centre in Chicago. We may never will never match Groningen for cycling, but the NI Executive need to be thinking about a large cycle park in the current planning for Belfast’s new integrated transport hub. Who can step up to the plate here – Belfast City Council, Sustrans, a co-operative or social enterprise? 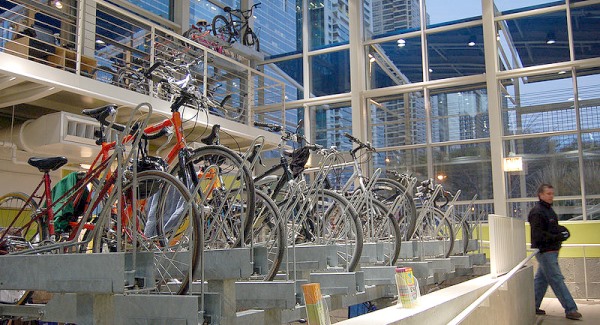 CCTV enforcement of the bus lane outside Central Station

The bus lane outside Central Station is meant for buses and bicycles only (see the sign). Taxis are excluded to keep the bus lane free at all times. Tell that to taxi drivers who park there every day. A dedicated taxi rank built as part of a £6m upgrade in 2002 now provides a competitive advantage for anyone parking illegally at the door. Meanwhile outside, cyclists have to filter in and out of traffic, avoid opening doors; buses are regularly held up in traffic. DRD have washed their hands of the problem; strangely traffic wardens don’t patrol here (check any Enterprise train arrival, it’s not difficult). The solution is very simple. CCTV cameras could catch anyone illegally using the bus lane, whether it’s taxis or the inevitable copycat car drivers, and we’ll have an efficient bus and cycle lane back again.

An important part of making Belfast cycle-friendly is true integration with public transport. Our train policies are too inflexible (or are they?) especially for tourists hiring bikes. Unlike Copenhagen you’re unlikely to get a bike carried by taxi. Taking inspiration from Vancouver, Translink and Ulsterbus could fit bike racks to the front of buses to allow seamlessly integrated journeys within and outside the city. Simple enough in Northern Ireland where bus public transport is wholly government owned? Not so, apparently. Translink apparently assessed bike racks on buses in 2010, and said no. So that’s the end of that then? Not really, we could make regulations now that bike racks must be integrated into the design of all ongoing replacement vehicles, and within about 15 years all buses would be bike-ready.

As for those visibility worries, it’s a wonder these buses don’t crash all the time. This video is funny because it’s by Translink 🙂

Belfast retail isn’t just about the centre – for historic reasons we have many thriving and crucial community shopping hubs dotted around the city. It’s hardly even worth mentioning that cycling shoppers can be as important as those driving, but some local retail interests hear that as white noise. But if even the arterial roads in Belfast are trying to compete with out of town centres on the basis of vehicle access and parking, they’re barking up the wrong tree and are in serious trouble. Arterial roads filled with parked cars and congested with noisy traffic are not nice places to spend any length of time. We need to attract people, especially locals, by making it easy to walk and cycle to our nearby shops. Start with a generous addition of cycle stands and think about converting some vehicle parking spaces into x10 cycle parking spaces, like this example from San Francisco. 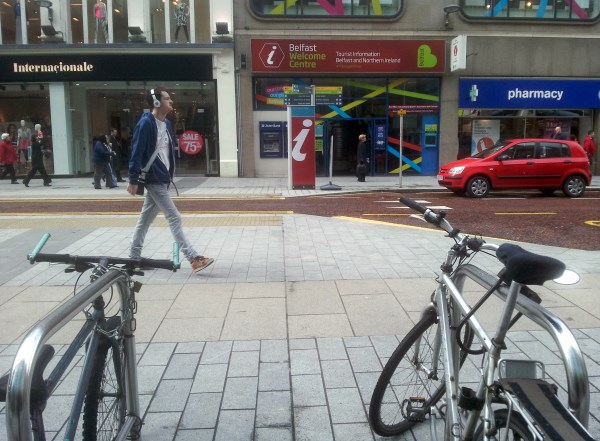 Recent events like Bike Week and Sustrans’ Pedal on Belfast have shown a good demand for cycling events. Simple things like the bike breakfast at City Hall on Bike Week, or occasional PSNI bike security marking sessions at City Hall have had a great response. Belfast City Council should consider holding regular branded events to encourage people to cycle to work, to shop or to socialise in the City. This could be something as small as social cycles, monthly history trails, or something really big and transformative like closing sections of the city to motor traffic (see Bristol’s Make Sundays Special initiative for inspiration) for mini festivals.

Last year saw a shambolic reaction by Belfast Chamber of Trade to new bus lanes, quickly followed by a quiet climb-down. Instead of being antagonistic towards bus passengers and cyclists (two groups with a similar spend profile as car drivers) shops should be offering discounts for cyclists parking outside their shops (see ‘Better bike parking’ rant above) or on production of a valid Metro day ticket. It might double as a useful piece of ongoing market research to begin to gauge how many city centre customers are private motorists (what, isn’t it 100%?) and play a more active part in making the Belfast on the Move changes work even better.

I’m trying my hardest at the moment to source a Dutch bike through local retailers on the Cycle to Work Scheme, so I declare an interest. Belfast even has a physical store of the world’s largest online bike retailer Chain Reaction Cycles, but authentic ‘Dutch’ style bike brands are almost impossible to source in Belfast. Our choice locally is limited to road bikes, mountain bikes and hybrids, and all of the compromises that brings for practical transport. Maybe the sporty models we have to choose from play some part in suppressing numbers of female cyclists? Yet bicycle racks at workplaces are filling up with heavier bikes these days – the demand is growing. We might not have Dutch cycle tracks on our streets, but that shouldn’t stop us having a choice of practical bikes designed to get us shopping, socialising, commuting, cycling the school run..

In the city centre traffic wardens ensure a churn of vehicles on designated spaces, which is good for business. They prevent dangerous or illegal parking in the city centre, which is good for safety. They also work on arterial routes, but why? Apparently to stop parking on urban clearways, which creates congestion at rush hour. But DRD don’t track warden movements, so who knows where the wardens go and how effective they are? Apparently Belfast’s cycle network has 81km of on-road cycle lanes, compared to just 51km of bus lanes. I know, weird! But the vast majority are advisory, meaning no-one’s getting a ticket unless there’s a live urban clearway (in other words, at rush hour). Wardens could be cyclists’ biggest ally, if they had a specific target to keep the city’s cycling network free of illegal parking during rush hour – with the knock -on effect of reducing overall congestion. Or we could just scrap the whole box-ticking concept of the advisory lane..

What frustrates as much as anything in Belfast is the sense that other cities are moving quicker than us and able to be more inventive about cycling schemes. Okay so New York’s protected cycle lanes take advantage of the type of road space not available everywhere in Belfast, and many cities leading the way for cycling have autonomy of planning and executive budget to implement schemes, while we have NI-wide Roads Service. Dublin City Council has a great example with DCC Beta projects, taking innovative an crowd-sourced ideas and running beta schemes to evaluate their potential. Fast, low-cost, interesting. Janette Sadik-Khan’s TED talk is worth watching to see how just trying out ideas, rather than taking years of grinding bureaucratic processes, can reap amazing results. Do we have the spontaneity in us? Could we trial the Ravenhill Cycling Corridor with planters or temporary kerbing?

The simplest way to increase cycling levels is by creating safe dedicated #space4cycling. All of the great cycling cities have this in one form or another, and the blueprint for Belfast’s cycling ‘network’ doesn’t feature heavily in best practice. Here’s exactly how it could be done in one road in Belfast, and it’s transferable to most other main roads. A cycling revolution without this as its aim is doomed from the outset. Dutch cycle tracks are great, but if they disappeared approaching junctions like all of Belfast’s do, they’d be pretty useless too. The Dutch set the standards for designing junctions to incorporate cycling. But all of this isn’t going to happen overnight, so isn’t very practical. But…hiring expertise from successful cities like Amsterdam, Copenhagen, Groningen, Utrecht or Seville to lead the change we need is practical, sensible and probably necessary (see Cyclesaurus again). It happened here with Ciarán de Búrca leading the development of Belfast Bus Rapid Transit and Belfast on the Move, bringing his experience from Dublin, so why not do the same for cycling?

Those are just 10 simple ideas which could make a big impression on Belfast. What do you think, and do you have any better ideas? Get into the comments, and get your thoughts over to your politicians and DRD. We need great ideas to make a great city!

Thanks for the input: