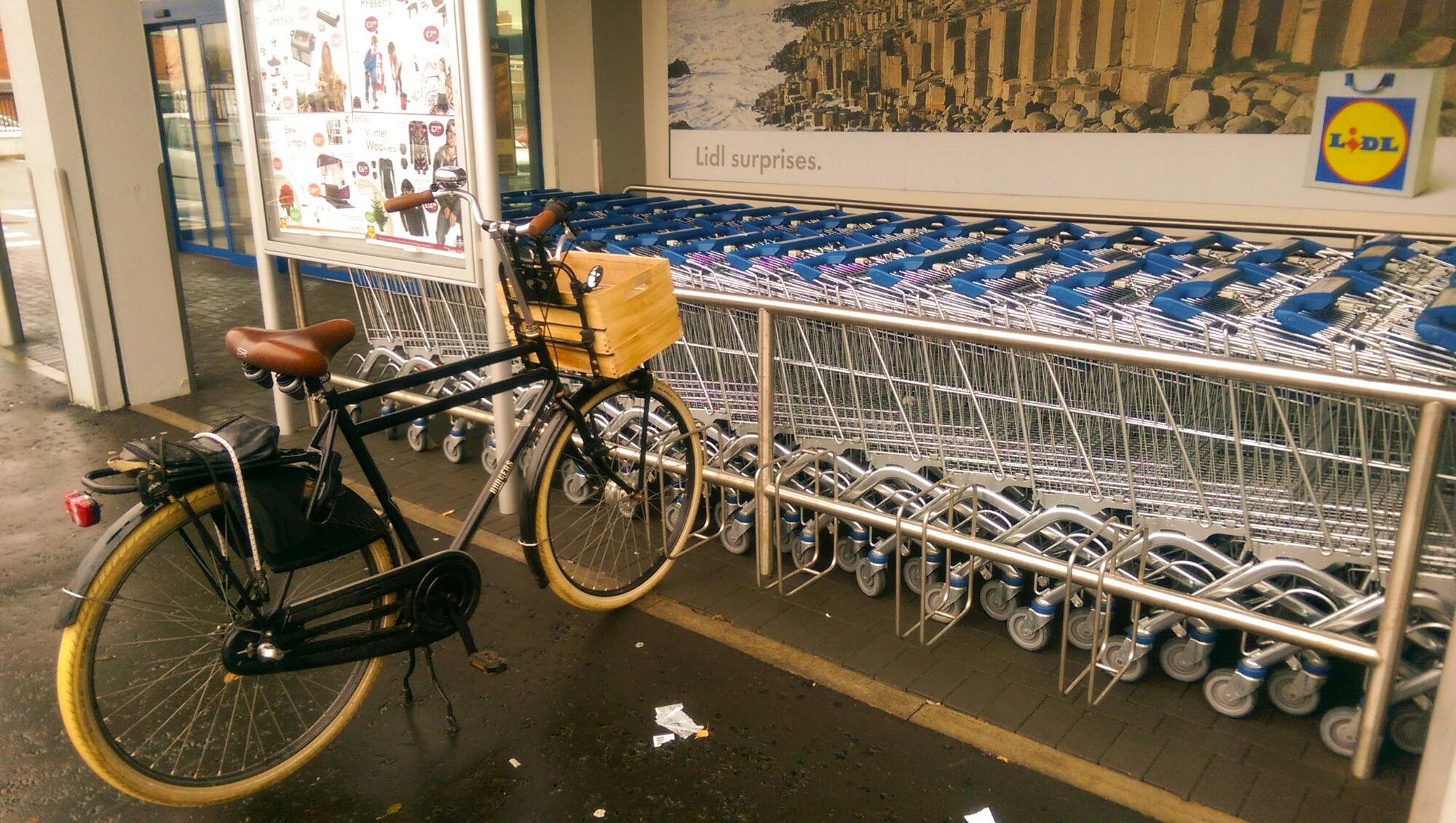 Belfast’s 7 large grocery retailers are not doing enough to support customers who want to shop and cycle, a survey of supermarket cycling facilities has found. The survey reports that there are just 100 bicycle racks outside Belfast’s 40 supermarkets, and almost half of Belfast’s supermarkets have no bicycle racks at all. This poses a significant barrier to the success of ongoing efforts to encourage more people to cycle in the city.

In November and December 2015, NI Greenways travelled to all 40 of Belfast’s main chain supermarkets – Asda, Dunnes Stores, Iceland, Lidl, Marks and Spencer, Sainbury’s and Tesco – to check how easy it is to pop in when riding past on a bicycle. This was inspired by a long, frustrating (and still ongoing) Twitter exchange with Lidl NI over their lack of bicycle parking at Castlereagh.

But what was the situation elsewhere in Belfast? And why focus on supermarkets – surely they’re only for doing the ‘big shop’ which needs a car? I dread to think how many small convenience stores I’d have to visit – so for this study I’ve left out Centra, Mace, Spar, Supervalu, Russells etc and smaller versions of supermarkets such as Tesco Express. Strangely, Forestside sits outside Belfast City Council but is definitely a ‘Belfast’ shopping centre so makes it into the survey – stores in Abbey Centre and Dundonald don’t.

One of the great benefits of cycling (and this has been shown in studies around the world) is the ability to stop at small independent stores and do more shopping, more often, in smaller batches. ‘Cyclists’ are great local shoppers. As well as independent retailers, most supermarkets in Belfast are on the main arterial routes, and whether through larger products ranges or competitive pricing, they’re occasionally on my list of stores to visit.

A week without a trip out on the #transportfiets is too long – off for a big shap at Tesco 🙂 #Belfast pic.twitter.com/r9MLMlPYuZ

However, trying to find somewhere safe, secure, well-lit and sheltered to lock a bicycle can be a challenge at many supermarkets. Sub-standard bicycle racks – or being expected to lock up to a lighting column, fence or trolley rack – feels a little bit insulting in clear sight of vast, beautifully-manicured car parking, or trolleys insulated from the elements.

So I devised a scoring system, based in part on Planning Service recommended standards for bicycle parking from 2005 (after which some of these stores were built or redeveloped), to benchmark the city’s supermarkets.

This system means supermarkets can be independently rated against a consistent benchmark out of 7 points for the quality of facilities laid on for customers arriving by bicycle. A score of 6-7 would identify a store offering adequate to good facilities, not necessarily exceptional. It also allows for an average score across each brand’s stores to be worked out, to determine which chain offers the best facilities overall. 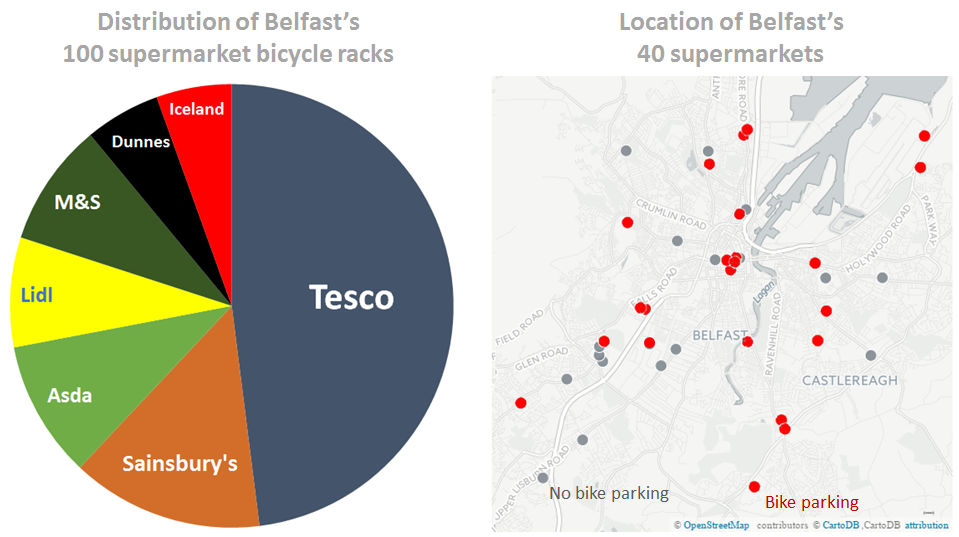 With an average score of 4.5 out of 7, Sainbury’s is the clear leader in cycling provision. 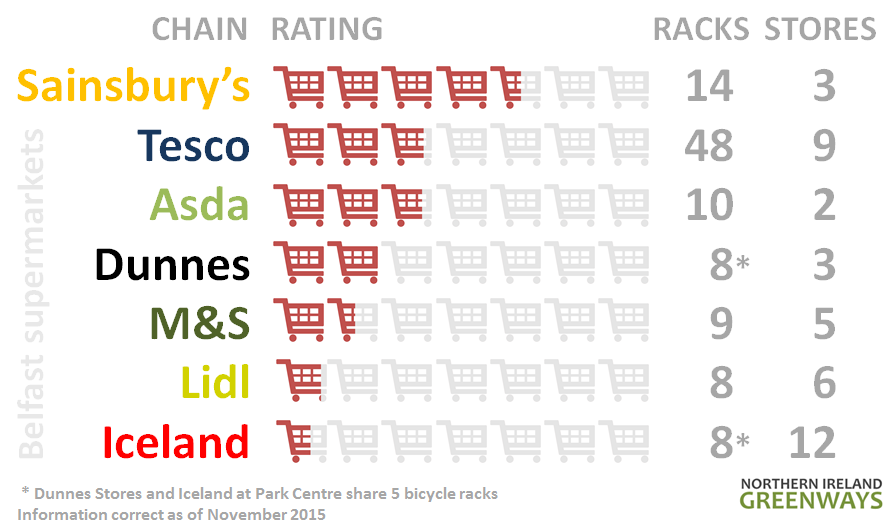 Sainsbury’s 3 stores at Forestside, Kennedy Centre and Knocknagoney have just 14 racks between them, but the quality, security, proximity to store entrances were a cut above the rest. Sainsburys and Dunnes Stores are the only supermarket chains with bicycle parking outside all of their stores in Belfast.

Although Tesco provides half of all the supermarket cycling racks in Belfast, the quality of their bicycle areas was not as consistent as Sainsbury’s.

Iceland is the only supermarket in Belfast with more stores than bicycle racks and, along with Dunnes, may not have been directly responsible for installing any of the cycling facilities which happen to be outside their stores.

Lidl’s only bicycle racks are designed to lock front wheels, rather than the recommended Sheffield-style stands.

Tesco Newtownbreda just pips Sainsbury’s Forestside to this title. Both stores scored 6 out of the maximum 7 points, but Tesco’s 15 racks and CCTV coverage tip the balance towards this superstore in south Belfast.

Just one, Sainsbury’s Forestside – offering a rent-a-lock service in case you’ve forgotten to bring yours.

How does my local store rate?

You can find a rating for each of the 40 supermarkets in Belfast, including comment from the brands themselves on the survey, on the following pages:

Supermarkets position themselves as key social nodes in our urban life, and they do play an important role in the fabric of communities. While it’s desperately important to use and support our smaller independent retailers, supermarkets can influence wider travel habits by taking a lead and making the bicycle a more attractive option. The investment required is tiny compared to some of the big supermarkets’ trading profits posted in recent years, and the space needed doesn’t seem to be lacking either. Re-purposing just 2 car parking spaces gets you into double figures of bicycle racks.

Good quality and attractive bicycle parking facilities should be an obvious choice for a responsible retailer interested in building good links with the local community. And the more people we can encourage to shop here and there, safe in the knowledge their bicycle is safe outside while their custom is valued inside, the more footfall we can drive to our smaller local shops too.

We’ll return to the same stores next year to see what’s changed and aim to give a 2016 Fréd Award to the Most Improved Supermarket. Whether succeeding or failing right now, individual benchmarks have been set – who can be the shining light in Belfast next year?