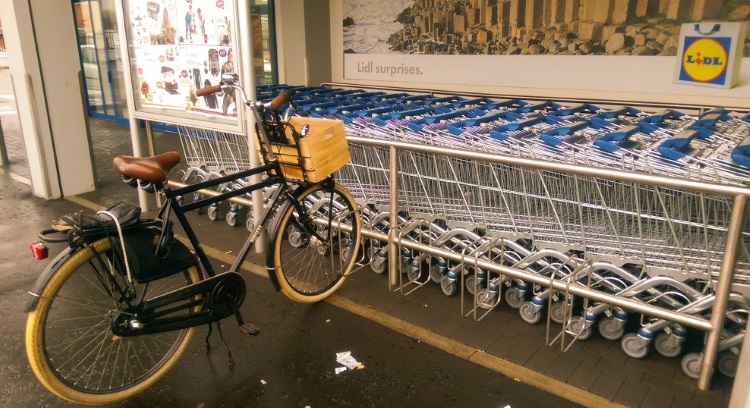 Over November and December 2015, Northern Ireland Greenways surveyed cycling facilities at the 40 chain supermarkets in Belfast. Lidl’s 5 major supermarkets were included, along with the flagship city centre store at High Street.

This system means we can independently rate any supermarket against a consistent benchmark out of 7 points for the quality of facilities laid on for customers choosing to arrive by bicycle.  A score of 6-7 would identify a store offering adequate to good facilities. So how does each Lidl store in Belfast rate for cycling facilities?

Nothing. This store has a special place as the inspiration for this survey, so thank you to Lidl.

Knowing my luck it’ll be the last supermarket in Belfast to get a bike rack. More on that later..

No bicycle racks at a supermarket virtually on the Connswater Greenway is bad enough.

Having Halfords next door showing you exactly what is possible (even if you consider this limited space) is much worse.

There will be no excuses here next year.

This is a curious case. The location doesn’t benefit from any government-provided on-street racks.

Unfortunately for Lidl, word reached NI Greenways that 3 wall-mounted bicycle racks were slated for inclusion as part of the planning process for this relatively new store.

More on this later too..

Just when you thought we were going for a clean sweep, along comes the strange phenomenon of the wheel-bending rack. Unsigned and very hard to spot even when standing right next to them, these are the most basic of provision and frankly the worst supermarket bicycle racks in Belfast.

This particular rack at the Shore Road store even has the added danger of being right beside the ‘road’ in the car park – a car parked right over this spot just after I wheeled away. 2 points out of 7 for a rack and proximity, and not much else.

Another wheel-bender at Stewartstown, this time scoring 3 points out of 7 for the additional benefit of being under the store roof for shelter. 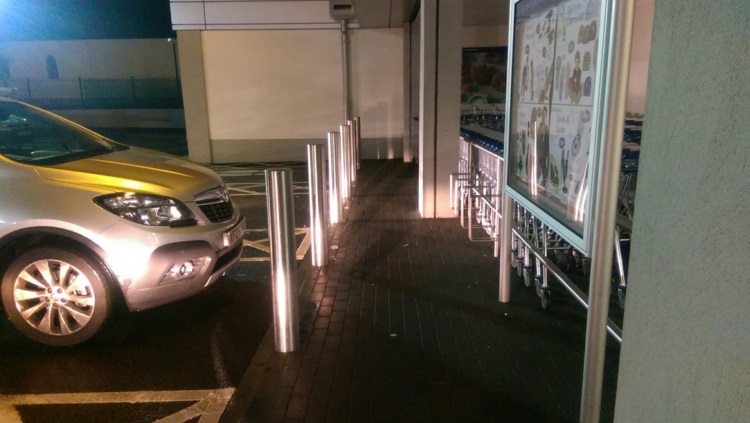 “2 stores mentioned have bike racks presently (Shore Road and Stewartstown). 2 stores are currently being redeveloped (Connswater and Andersonstown Road) and we are considering plans to have bike racks. Unfortunately our city centre location does not have a car park therefore we cannot facilitate a bike rack. “

The statement from Lidl is welcome (God knows many have tried on Twitter to get such detail) but what’s left unsaid is quite interesting. First off, that firm ‘no’ on High Street is strange given the planning permission had 3 racks listed.

No mention is made of the quality of the racks slated to go into Connswater and Andersonstown Road – front wheel racks again? Please no. Finally, the silence on Castlereagh Road is funny given how many times ‘feedback has been passed on‘ over the last two years. Maybe management might be advised to actually engage with organisations who care about cycling? It’s not like Lidl is pushed for space on this site..

Come on Lidl, you can do much better than an average 0.83 out of 7 points, if you really care. I’m rooting for you.

How does Lidl rank for bicycle facilities against other supermarkets in Belfast in 2015? Find out in Store Wars VII: The Cycling Revolution Awakens..