Is Northern Ireland about to squander a golden chance to promote its unique cycling heritage? Government agencies are ignoring a local anniversary of world significance as the Giro d’Italia Grande Partenza passes within yards of one of the birthplaces of modern cycling.

On 18th May 1889, local cyclist Willie Hume took part in a series of races the old North of Ireland Cricket Club Grounds on the Ormeau Road. His safety bicycle (the direct ancestor to modern bikes) was fitted with pneumatic tyres, which were being used in competition for the first time anywhere in the world. Hume had purchased the tyres from John Boyd Dunlop, a Belfast-based Scottish veterinary surgeon, who’s development was the world’s first practical application of a pneumatic bicycle tyre.

Hume, not one of the better riders at the meet, won all the races in which he entered. His competitors rode Ordinary bicycles (better known as Penny Farthings) which until that day were the fastest bicycles on the road and track.

The pneumatic tyred safety bicycle was the first practical cycle to have widespread appeal beyond the cycle racing fraternity. Bicycles played a role in influencing social change in the following decades, especially in the early period of struggle for gender equality.

So what’s the problem?

Fast forward 125 years and one of cycling’s Grand Tours, the Giro d’Italia, rolls into Belfast one week before this anniversary. The route of Day One’s team time trial will take riders along the Lower Ormeau Road, past the site of the cricket ground (now redeveloped) where Hume’s winning races took place. 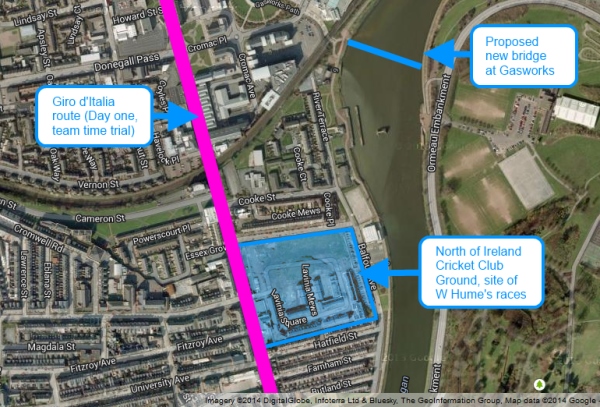 These two events occurring side-by-side is wonderful serendipity. The chance to recognise, celebrate and promote the exceptional achievements of Dunlop and Hume, with tens of thousands of tourists here and the eyes of the cycling world on Belfast, should be a marketer’s dream. It’s understood local cycling campaigners have approached a number of government organisations involved with the Giro d’Italia since September last year, to push for some promotion. But with just 3 months until the Big Start in Belfast, no Dunlop/Hume event is planned, or likely to happen.

“To celebrate Hume and Dunlop is to celebrate technical innovation leading to social progress. Creating a faster bicycle is significant enough, particularly when the cream of the cycling world is descending on Belfast. But the real legacy of Dunlop/Hume was in helping to enable cycling for all, male and female, young and old, fast and slow.”

John Boyd Dunlop appears on local Dankse Bank £10 notes, and a plaque to his achievements is sited at his old May Street offices, but no public participation or tourist-focused awareness events are planned around the week of the Giro d’Italia.

Simple and achievable ideas (even with just 14 weeks until the Giro) have been floated to mark the occasion:

This story of local technical and manufacturing innovation and sporting achievement leading to a world revolution in the use of bicycles needs to be cherished and retold. Northern Ireland is experiencing another golden period of cycling innovation and revolution; the Giro d’Italia arriving this year, everyday cycling on the rise especially in Belfast, and local companies such as Chain Reaction Cycles, See.Sense. and Jyrobike are taking Northern Irish entrepreneurial spirit and innovation onto the world stage once more.

The Northern Ireland government needs to seize the chance to use the Giro d’Italia Grande Partenza 2014 for more than cycling sport promotion and a fleeting tourism boost. The Dunlop/Hume story allows us to promote local business innovation (past and present), our place in the development of everyday cycling across the world, to show our pride in local achievements, and to champion cycling for everyone in the 21st century.

The many thousands of cycling fans who will flood Belfast’s streets in May, and millions watching around the world, are passionate about the history of cycling. Belfast people will welcome them with warmth and friendship, and Belfast people are known as great storytellers; so let’s tell them a great story. For as quickly as the Giro peloton flashes out of Belfast, this unique opportunity will be lost.

Following up the #DunlopHume125 story in the media: