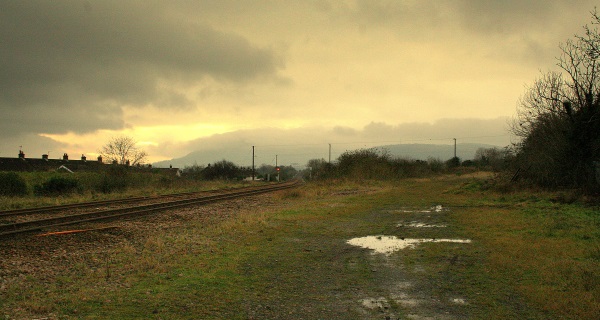 A golden opportunity to link two communities with a new greenway centres on a disused railway just six miles north of Belfast. The ‘Back Line’ between Monkstown and Greenisland has been dormant for over 50 years, yet the land is still in public ownership. Developing a new 2.7km traffic-free path could provide great options for locals trips without the car, and build upon the success of the recently opened Newtownabbey Way.

The Back Line was actually the former main line of the London, Midland and Scottish Railway (Northern Counties Committee) from Belfast to Ballymena. The layout of the junction at Greenisland meant trains had to stop and reverse during their journey. The 1930s solution of constructing the Greenisland Loop Line (it’s viaducts now such an impressive feature of the Newtownabbey Way) reduced the need for the renamed Back Line – services stopped in the early 1960s and the line fell into neglect.

Starting from Greenisland (directly under the Knockagh Monument) a greenway access could be opened from the terrace which runs from the train station, with an appropriate barrier between the pathway and the live railway.

Starting the run uphill towards Monkstown, another access point into Farm Lodge Park is possible. Although (as will become the theme along the route) most local housing developments have turned their back to the old railway line, making access to many streets difficult if not impossible.

There appears to be some fields still yet to be developed into housing around Meadowlands, Meadow View and Woodlands, with a greenway spur both possible and desirable. Similarly, Bramble Avenue could be connected to the greenway.

A bridge at Burnet Avenue runs over the line with a single line tunnel underneath. There appears to be ample space to ramp access from the street.

From the bridge, it’s possible to see the railway track still in place.

This points to one of the quirks of the ‘Back Line’ – even though it’s overgrown, disused and cut off from the network, it was never formally abandoned and remains legally a railway. While there may be a notion to retain it for the purposes of future expansion (as suggested by some in a recent consultation on future railway investment in Northern Ireland) it doesn’t seem to be a high priority in the short to medium term.

Bringing the greenway all the way to the Monkstown Road is more of a challenge. A gate opens onto the old railway alignment at Oaklands Drive, providing a good local access point.

However lack of space on the live railway embankment to the Monkstown Road Bridge mean a raised parallel pathway may not be viable. Other creative options will need to be investigated.

There are many obvious advantages to developing a greenway on this stretch. The issue of land ownership and access rights cause difficulty in greenway projects, but here the land has remained in public ownership. Creating a viable active travel corridor between the Monkstown and Greenisland communities offers options for short trips to local schools, churches, community centres/amenities and independent retail businesses.

Better linkages to workplaces in the Monkstown Industrial Estate, and improved cycling connections to a second railway station in the area builds on the great work to open the Newtownabbey Way. Indeed, with the ongoing A2 Shore Road upgrade expected to have some consideration to space for cycling, a triangular network of active travel space would begin to take shape between Newtownabbey and Carrickfergus.

If the local community backs it, the right ingredients are there for a successful project to bring life back to the Back Line.

What do you think of the idea to open a Monkstown to Greenisland Greenway? Are you a local resident in favour or against? Would you prefer to call it The Back Line Greenway or perhaps The Knockagh Greenway? What are the biggest obstacles to development? How would you use the greenway? Leave your comments or share on social media to get the discussion going..