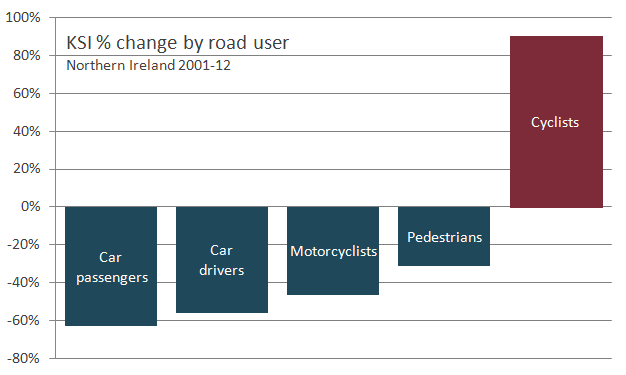 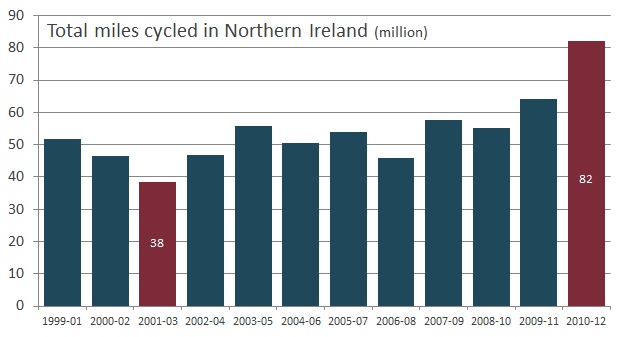 Cycling is also on a uniquely sharp rise among private road user groups. Apart from the erratic motorcycling levels over the last decade, most journey types have seen quite steady changes. Cycling appears to be set on an interesting trajectory, owing to increases in both the number of and length of journeys. 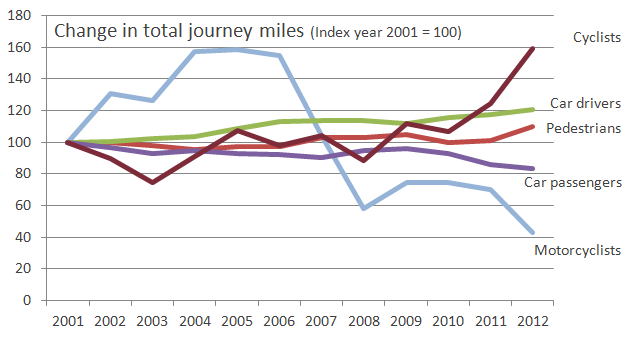 Figures released by the PSNI in June showed that from 2008-2012 the number of people killed or seriously injured (KSI – DOE headline measure) while cycling had risen, doubling over that period to a high of 57 in 2012.

All road users have benefited from safer road design, safe driving promotion and many other factors since 2001 – the earliest date for a detailed road user casualty breakdown from the PSNI. Generally road users have seen KSI figures fall in that period – only those cycling have seen an increase.

These raw figures are worrying, but it’s important to take account of changing transport habits. Coupling the KSI figures with NI population estimates and the Travel Survey allows us to see casualty rates in terms of distance travelled. The two dominant forms of road travel are car drivers and car passengers, and clearly show the wonderful road safety improvements in Northern Ireland since 2001. 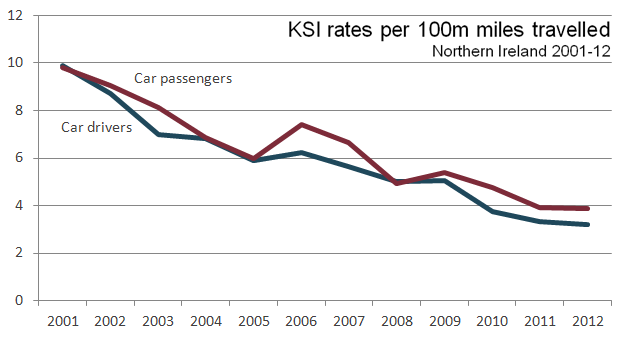 Cycling’s popularity in Northern Ireland has seen an increase in average annual miles travelled from 19 miles per person to 28 between 2001 and 2012. However, the KSI rate is at best flat over the same period. Having closely tracked pedestrian KSI rates for the best part of a decade, there has been a significant shift in the last 3 years to the point where cycling is now nearly twice as dangerous as being a pedestrian on our roads. 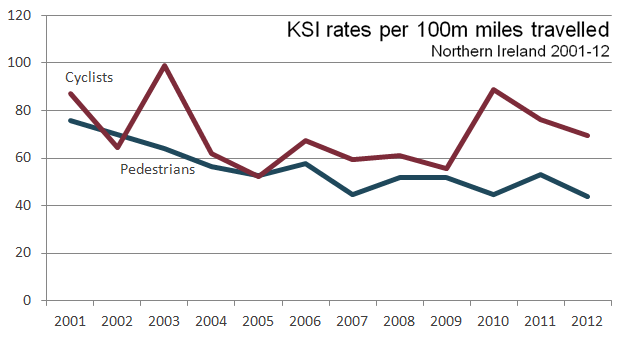 There is little doubt that the motorcycle is still the most dangerous form of transport in Northern Ireland, as demonstrated by the shocking deaths of 3 people in the same weekend in July. Like cycling, the casualty rates shows little sign of reducing. 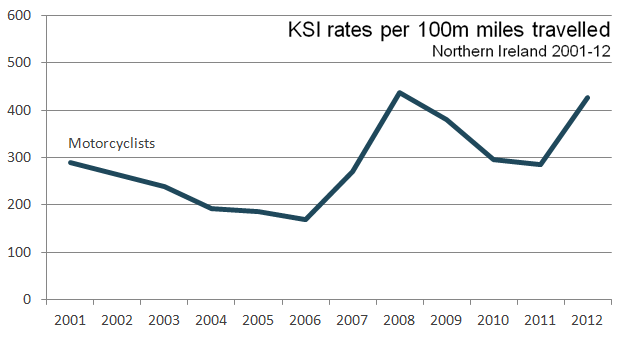 Perhaps most concerning is the number of cyclist casualties as a percentage of all road users. Despite the increase in journey miles, cycling as a mode of transport across Northern Ireland is essentially a flat line at 1% share of journeys over the last 10 years. Even in the early 2000s, cycling represented over 2% of all road users KSI (unfortunately) punching above its weight. But in a shocking 3 year departure from the reality of cycling levels, cyclists now account for 6.7% of all road users killed or seriously injured in Northern Ireland. 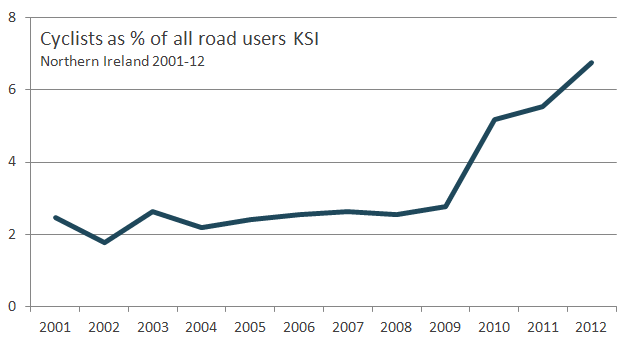 This is worrying because there is virtually no discussion of this in official circles; no record of rising cycling casualties being debated in the Northern Ireland Assembly; no press releases from DOE or DRD / Road Service acknowledging this particular problem; no public campaign from any local cycling organisation; there is almost complete silence.

The trend of rising casualties seems inevitable to begin claiming more lives, and 2013 is already the worst year for road cycling deaths since 2005. Since March 2013, 3 people have been killed while cycling on our roads:

DOE have made some moves to include cycling in road safety campaigns, but the single most effective route to better safety is by physically separating cyclists from traffic in appropriate places in our towns, cities and rural main roads. This is the main plank of the success of cycling in the Netherlands, and is the direction of travel for road design in London’s new cycling vision.

If we are to encourage more people to cycle, and reverse the awful casualty trends, Northern Ireland needs to commit more of its transport budget to cycling measures. As a quick comparison the Netherlands spends €30 per head of population annually on cycling, where over a quarter of all trips are made daily by bike. London plans to spend upwards of £12 a year per head to raise city cycling levels above 2% through safe separation.

Average annual cycling spend per head of population in Northern Ireland over the last 5 years is just 58p.

Everyone in Northern Ireland wants to Share the Road to Zero deaths on our roads: 58p represents pitiful failure by DRD in the face of rising cycling casualties. It is now clearly the battleground where we must fight for change.