Most days cycling in Belfast to work, to the shops or back home is uneventful. But then it’s Giro d’Italia year in Belfast and magic things are happening. Even a small section of a simple journey can hold remarkable sights within the space of a few hundred metres.

You can keep your pink pathway, that Ormeau Road junction was like nothing I’ve seen in Belfast. EVERYONE WAS WEARING NORMAL CLOTHES, LIKE CYCLING WAS NORMAL OR SOMETHING and I was checking what city I was in. What’s it going to be like when the good weather hits in summer?

All that kerfuffle at the start appeared to be a promotional video being shot for the Giro d’Italia. (Hopefully this isn’t the extent of the legacy for everyday cycling we keep hearing about..) 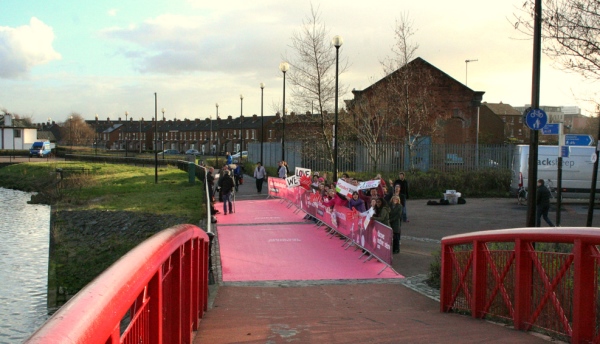 And no, that lovely hi-viz Giro pink section of pathway isn’t permanent, scrubbed away as it was later that evening..

Which reminds me – are we going to copy St. Patrick’s Day in Dublin and Chicago and dye the Lagan pink on Giro day one? Those boys made a fine stab at it with their powerhoses..

How does an innocent ride home and cheery blog post end up with a related story reaching The Times of London (no less) the very next day? Well, people cycling along the Gasworks path this morning found one section of pink paint remaining (powerhose guys, you had one job!) which wasn’t mixing well with the mizzly rain over Belfast. The early warning signs were there:

@nigreenways @SustransNI Whoever is responsible for this needs to make it safe! V slippery when wet & paint transfer pic.twitter.com/uADCwxvwgA

With so many people cycling along at rush hour (you could see the pink trails) and conditions worsening with heavier rain, the inevitable happened to poor Chris Lindsay:

Came off my bike this morning cycling into work. On wet paint from Giro d'Italia Start line! @chrislindsay_ pic.twitter.com/RypahycFyu

From light-hearted Giro japes to epic PR fail within 24 hours. Seeing Chris’s tweets doing the rounds of local journalists, The Times then picked up the story on its website, taking the blunder a wee bit national. Oops.

On the bright side, it’s probably good to get these bumpy patches out of the way before the Giro itself rolls into town.

@chrislindsay_ thanks! bike damaged as is my cycle gear covered in pink paint! Got more pics of the same as well! pic.twitter.com/ZzAthwDy3d