Northern Ireland Greenways is proud to launch a unique new tourist attraction, the Belfast Cycling Study Tour. Building upon the concept of the legendary Hembrow Study Tours in the Netherlands, we are targeting a niche but growing market of cycling advocates who want to experience the very worst in government-funded cycling provision. The tour is sure to delight everyone with some of the daftest  infrastructure ever committed to a road surface.

Aspiring to rank alongside Titanic Belfast and the Giant’s Causeway as a magnet for overseas visitors, tours will start every day from Belfast City Hall. Without even turning a pedal, you can marvel at the lack of any visible cycling infrastructure around the hub of the forthcoming Belfast Bike Hire scheme! 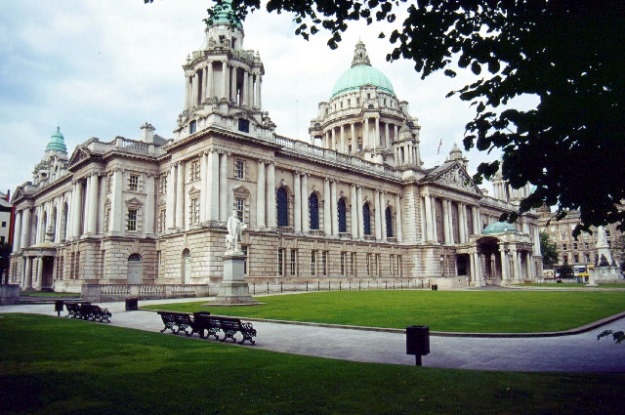 Our professional tour guides (Dessie and Smicks) will lead you on an action-packed tour of some truly original and world-class rubbish cycle lanes and more. Here are some of the highlights..

First up, it’s one of the most famous cycle lanes in the world! Swinging round the corner into Upper Arthur Street you’ll be amazed that Belfast has a stretch of near-Dutch standard separated cycling! But don’t expect to cycle along this track – if your tour is on a day that ends in ‘Y’, you’ll be sure to see the local bins on their traditional spot blocking the way. Or trucks. Or vans. Or Christmas trees, we’re not picky. This is one you’ll be telling the grandchildren about. 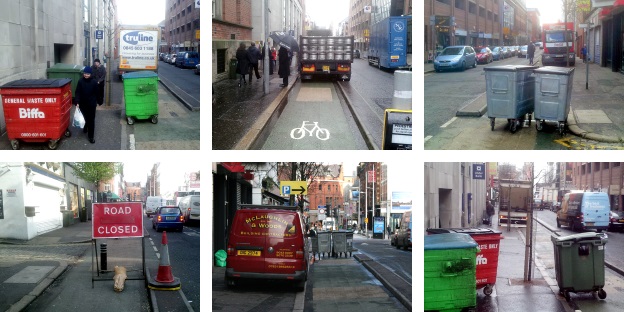 To get the most out a visit to the Bin Lane you should consider some light reading in preparation:

At the other end of the Bin Lane, just 50m away is the latest innovation in cycle safety and probably a world-first: the triangular-green-pointy-hanging-over-a-junction-advisory-cycle-lane-dinosaur-tail-thingy, or Cyclesaurus to give it its technical name. Local cyclists still haven’t figured out the purpose or function of this paint (and it took just one week between the paint drying and the first confirmed collision between a bike and a car) but it’s sure to delight the Study Tour! 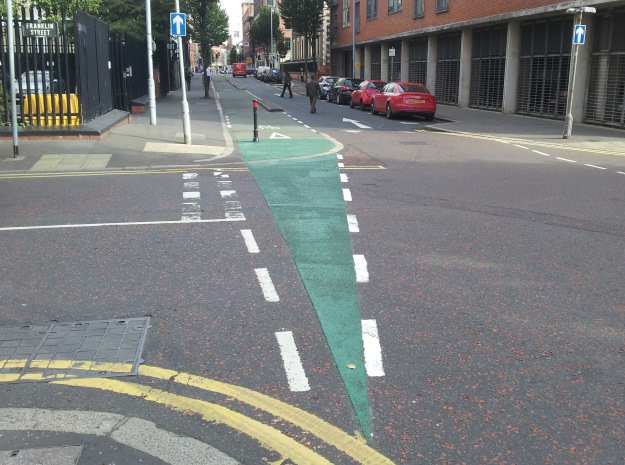 Turn the corner and you’ll find the most useless cycle hoops in the country, outside the Department for Regional Development (DRD) and Roads Service offices – basically Northern Ireland’s Transport HQ. Keen observers have notched up 434 days and counting since a bike was last seen attached. Bless ’em, their day may come! 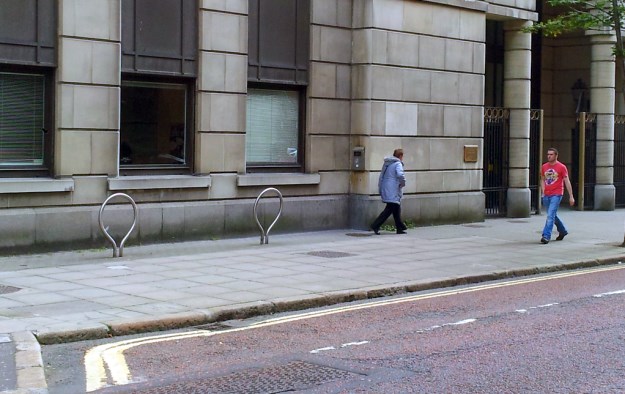 Passing across Ormeau Avenue and onto Apsley Street you’ll experience more Belfast innovation – a one-way street with an advisory contra-flow cycle lane sandwiched between parked cars and oncoming traffic. Phew, it’s a mouthful! Despite much evidence of the benefits a North American-style protected cycle lane (they go on the other side of parked cars) DRD are determined to plough their own furrow, while cyclists plough off somewhere safer like the footpath.

It’s worth mentioning at this stage that the Belfast Cycle Study Tour accepts no liability whatsoever for injuries suffered while navigating Belfast’s daft cycle lanes – you WILL be made to sign a waiver and insurance is compulsory. Moving on! 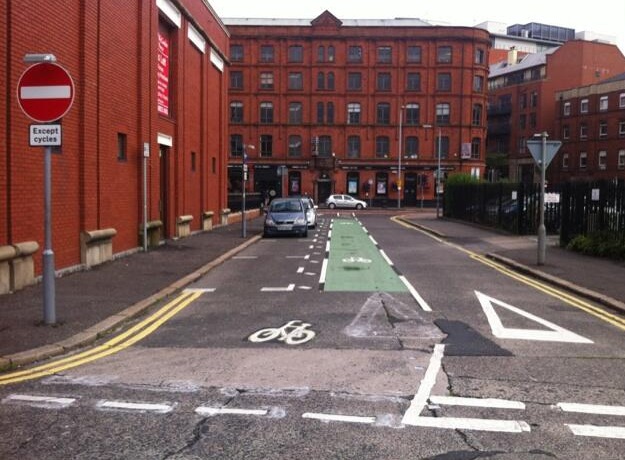 No cycling tour of Belfast would be complete without one of the longest-standing pieces of daft infrastructure in the city, the bus shelter chicane beside Ormeau Park. Over a decade since designers admitted defeat at one of the busiest pedestrian/cyclist intersections, locals still get a wee heart-stopping thrill every time they go round the shelter and hope to emerge unscathed on the other side. 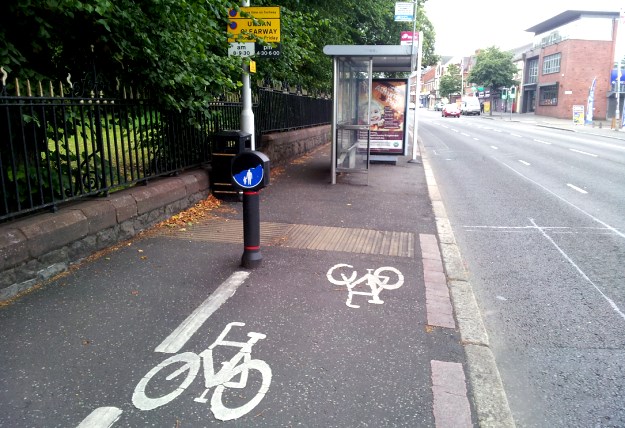 Doubling back over the Ormeau Bridge and the start of the more energetic phase of the Study Tour. Belfast boasts a wonderful inner city riverside path for leisurely cycling. But what’s this? Bumpy cobblestone features at regular intervals? Surely this embarrassing 15-year-old mistake will be rectified whenever the opportunity presents itself? Not a bit of it! Repair contractors relayed large sections last year with EXACTLY THE SAME PATTERN OF STONES. Not so good for Belfast cyclists, but great craic for the Study Tour! Regulars at Belfast’s Urban Sports Park T13 described the experience of cycling here as ‘sick’.

Across the Lagan again passing the Odyssey Arena, and another separate cycle lane, shiny and new. But marvel at the three sharply-angled BMX-style ramps which have been installed to make sure any journey is a fun journey! Five o’clock is the perfect time to observe commuter cyclists unexpectedly taking to the air. 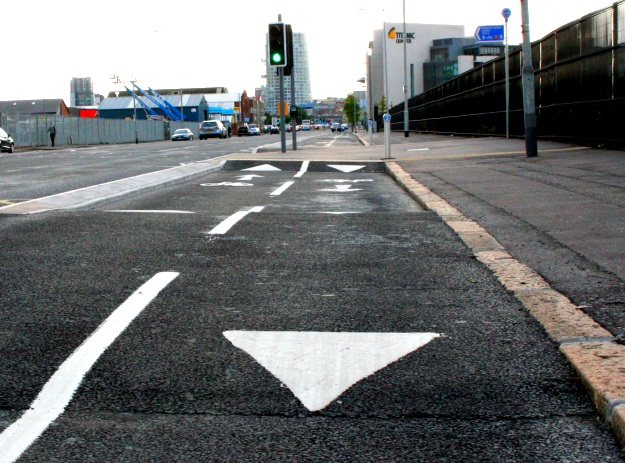 Into Belfast’s docks for another old-school piece of cycle nonsense, the Spider’s Web. The National Cycle Network meets a punishing mixture of lighting columns, traffic sign poles and random bollards arranged in the kind of challenging pattern usually seen in the slalom on Ski Sunday. If you can emerge with your pride and face intact, don’t get too cocky as random glassy debris and unyielding freight lorries are there to mop up the ‘lucky’ cyclists. Exhilarating! The Spider’s Web is an early favourite to feature in the time trial stage of the 2014 Giro D’Italia in Belfast. 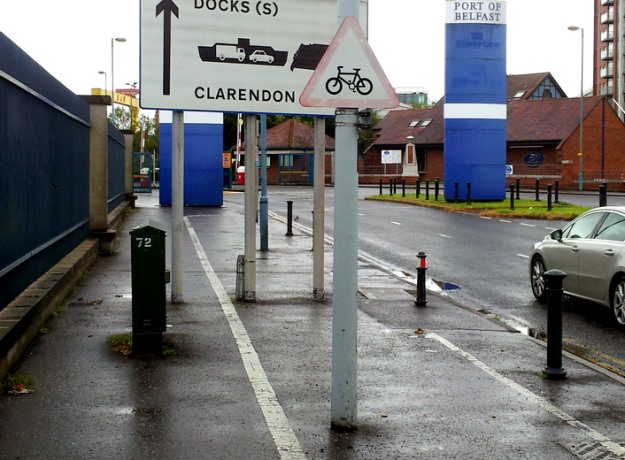 Finally we go freestyle and take you up any major arterial road (your choice) to experience Belfast’s amazing advisory cycle lane network. Marvel at parked car after parked car; try your best to see the cycle lane (it’s impossible!) and enjoy tussling with traffic when that cycle lane you’re meant to be in is covered in vehicles. Spot prizes are available for anyone who clocks a record number of illegally parked cars!

Tours will run from March to October only, as Belfast’s cycle lanes and greenways are not on the gritting or snow clearing schedule, so we can’t guarantee access or unbroken bones!

We hope to have a grand launch soon with members of the Northern Ireland Assembly All Party Group on Cycling, the Regional Development Committee, and the Minister. Prices for the tour are fixed at 58p per person, in tribute to Northern Ireland’s current annual cycling spend – and let’s be honest if the government spent any more than 58p, this tour just wouldn’t be possible!

We hope the Belfast Cycling Study Tour will form an important pillar in the bid to host Velo-city 2017, and that the new DRD Cycling Policy Unit will look at offering some of these daft features protected heritage status as they set about revolutionising cycling infrastructure in Northern Ireland. Sign up today, you’d be daft not to!

Thanks to @rosspmcgill and @chrismurphy201 for inspiring the Belfast Cycling Study Tour concept, and of course to @davidhembrow and @judyhembrow for their actual work to promote safer cycling infrastructure in the real world!