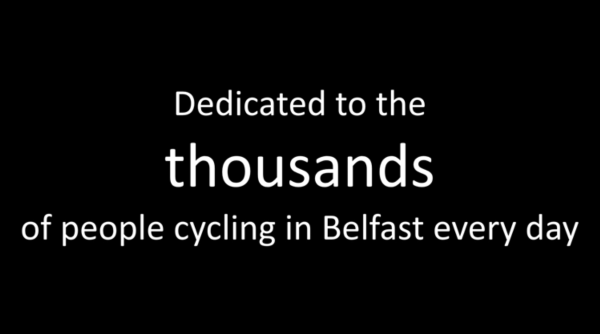 Recently a group of 16 cyclists from Belfast showed that the city’s cycle ‘network’ is effectively a car park. Over 5 days they encountered 878 illegally parked vehicles blocking their commuting journeys. That was an illegally parked car blocking a cycle lane every 250m. This was raised with the Department for Regional Development, the Stormont Regional Development Committee and Belfast MLAs and Councillors.

This was actually the second illegal parking survey conducted by Belfast cyclists, and we received a terribly poor response last year (red light jumping – really?!). This time around, the Department have spent even less time addressing the survey, with another crushingly boring letter (with press office written all over it) ignoring the problem. The full response is attached below, but is perfectly summarised by the final sentence:

“Following your e-mail [the traffic warden contractor] NSL has been directed to continue to take enforcement action as necessary on their routine patrols during clearway periods.”

This can reasonably be boiled down to:

We are acting upon this information by doing nothing different.

DRD makes a big deal of it’s online and telephone contact points to report issues as they happen, but when faced with criticism of their system of enforcement, they’re unwilling to engage. Sitting 6 months down the line and very little has changed; night after night the same problems occur.

The circumstances may be slightly different, but look 100 miles down the road to the Dublin City Council Beta Projects and despair that DRD can’t be more open to this kind of innovative public engagement.

Frustration is building that DRD have no interest in looking at this issue, and by association, no interest in the safe operation of the existing cycle lane ‘network’. The survey team will be seeking a meeting with DRD to address cyclists’ real concerns, to try to move the issue forward:

Although no-one’s betting the house on that meeting happening..

The Reclaim Belfast’s Cycle Lanes team and a growing number of local cyclists are not championing on-road advisory cycle lanes – in fact they are increasingly recognised as outdated, unsafe, and do nothing to encourage more people to cycle. Indeed the urban clearways rules, as referenced in DRD’s letter, mean it’s perfectly fine to block a cycle lane for 2 minutes at a time to set down / pick up passengers. These may be cycle lanes by name, but they are crafted around the needs of motor vehicles and cyclists are not the most important users.

However, until DRD open their eyes to best practice from the Netherlands, Copenhagen and others, it’s practically all we have. If DRD want to crow about their £9 million investment in Belfast cycling infrastructure, then along with Roads Service and NSL they have a responsibility to keep the lanes clear when they’re meant to carry cyclists. No-one is prepared to admit the problem, so no-one is taking responsibility to sort it out.

Thank you for your recent email about illegal parking in cycle lanes in Belfast during morning and evening clearway periods.

As you will be aware, NSL provides parking enforcement on behalf of Roads Service and routinely deploys Traffic Attendants to patrol the main arterial routes in Belfast during the morning and evening clearway periods. Traffic Attendants will take enforcement action if they detect vehicles parked in contravention of enforceable restrictions.

During clearway periods vehicles are permitted to set down and pick up passengers, however they cannot simply park. If a vehicle is detected by a Traffic Attendant as parked during clearway times and the driver is in the vehicle they will be afforded the opportunity to drive away and park legally elsewhere, however, unattended vehicles should be issued with a Parking Ticket.

During clearway periods it can be difficult for Traffic Attendants to deal with short term parking as vehicles often park for a few minutes only, or they may drive away before a Parking Ticket is issued, or the Traffic Attendant may be patrolling another location when these vehicles park.

As part of the new Parking Enforcement contract which commenced in October 2012 Roads Service has also introduced a number of new initiatives including;

I trust this information is of assistance to you.