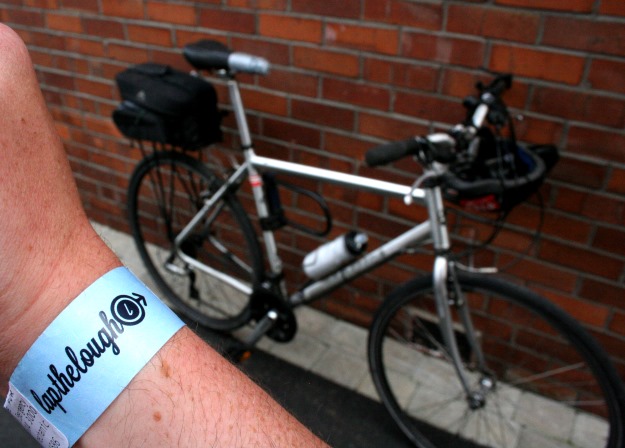 On 25th August 2013 I fulfilled a wee ambition and took part in my first cycling ‘sportive’ event, Lap The Lough. I had real worries that I would make a fool of myself, both with my gear and the real possibility of not finishing. So how did this amateur do?

As a diehard urban citizen cycling champion (or maybe because I don’t own a road bike?) I used my 8 year old commuter hybrid bike. I seriously began to question this choice as I queued to get off the motorway, it seemed as if EVERYONE rolling down to the Peatlands entrance was in lycra and on race-chiselled road bikes. Would I be ridiculed?

My set-up was complete with a pannier full of my provisions for the day, and even my D-lock – I was going to remove it in the car park before setting off, but I discovered too late it needed a screwdriver. Daft lack of planning, and more weight to lug around, d’oh! Whatever the worries, this was MY bike, my daily travelling companion since 2005, we were perfect partners and understood each other’s strengths and limitations.

Of more concern at the start was my lack of training, especially having read the excellent training plan tips provided on the Lap The Lough website. Having returned from a fortnight’s holiday just 2 weeks ago, and then experiencing a full week of sickness, my ‘training’ was limited to my usual 3 mile commute twice a day. I had genuine concerns about finishing an 85 mile course.

I was confident that daily commuting leaves a residual cycling strength in my legs, but stamina over the course of an estimated 7-8 hours of cycling was unknown. I’ve attempted just 3 longs trips in my life. In 1998 I fancied trying to cycle from Belfast to Dublin before getting the train to Cork the next day. Having suffered cramps on the descent into Dundalk I abandoned the attempt in favour of the Enterprise train. My mistake was not training in the lead-up, a mistake I wouldn’t repea… oh.

Twice I’ve tried the 60 miles from Portrush to Belfast, as recently as summer last year. Both times I went in with the benefit of months of lunchtime cycling for fitness, yet my average speed wasn’t much more than 10mph. That wasn’t helped by the crushing experience of opting for the Seven Mile Straight (all uphill) and attempting to summit Ligoniel. This final stretch broke me both times to the point of dismounting (nevvvver get off the bike) and even though I wouldn’t face a major climb on Lap The Lough, there remained a mental barrier of 60 miles beyond which I had never truly tested myself.

The organisation at the start was impressive, registering 2,000 cyclists in time for the 9am start must have been hectic. Just 5 minutes after arriving at Peatlands Park I had my welcome pack, wristband, helmet stickers and was pottering down to the start. Wisely picking the red group for 10-14mph average, we waited patiently for the speed merchants to depart before rolling out en masse. The early going was a delight; it was lovely to be in a big group and the roads seemed to belong to us, only the occasional car struggling past bringing reality back home. After a quick stop to wrangle my phone’s GPS into collaborating with Strava, I was on the open road.

What was difficult to judge at the start was how to pace myself. Should I hang in with a group, how do I know what pace to adopt to manage the full trip? It was tricky to know when to overtake, but a comfortable rhythm soon developed and passing or being passed really didn’t matter to anyone.

The 10 mile mark seemed to pop up very quickly, which gave me a little inspiration. I quickly fell in with @AngelaJWallace and it was great to have some company and a chat which took the mind off the trip ahead. I was particularly envious of the tales of cycling holidays, something which sounds like a perfect way to experience the wider world.

Navigation was made simple with little Lap the Lough logos at points of possible confusion, and at almost every junction requiring a turn, the friendly motorcycle outriders were there to point you in the right direction and stop traffic 🙂 and the same friendly faces were seen again and again through the day. A boring task for the volunteers concerned, and an effort greatly appreciated.

Getting used to the etiquette and experience of riding with other cyclists was interesting – plenty of people shouting ‘car up’ or knowing to listen for faster riders coming up on the right shoulder. It was all new, as was the sound of an approaching cycling club peloton – more like a revving vehicle than a group of cyclists. Even drivers on the busier roads were reacting to that most unusual of concepts for Northern Ireland – cycling safety in numbers. I didn’t have a bad experience with a vehicle all day, and the organisers’ efforts in erecting signage in the lead up to the event no doubt helped.

Everyone was reminded that “it’s not a race”, and the roads were a heady mix of cycling clubs, enthusiasts, those taking part for charity, families and people just out for a day’s fun and craic. It was lovely to see people’s friends and relatives out on the roadside and at stop points, or cyclists chatting at friends’ houses – I even managed to fit in a wee family stop myself to boost the spirits.

The advice to eat and drink before feeling hungry or thirsty was sound, and I took a good 15 minutes break at each of the 3 official stop points. Approaching the 60 mile mark my thighs were beginning to burn and waves of fatigue were noticeable, but amazingly I felt a strong ‘second wind’ especially on the small hills. I actually thought I might have made a mistake by making the third official stop, possibly squandering that good feeling. But even as I started to believe the remaining 25 miles was very achievable, it was important to keep nourished.

Back on the road and I was into the unknown, beyond previous limits and possibly my capability. In everyone’s favour that day was the wind direction, mostly a light breeze but still a headwind from Portadown onwards, gusting at times approaching Toome. But on the turn south towards Dungannon there would be a tailwind to bring us home, which was a relief. I got a hefty fly in the eye for daring to remove my sunglasses, and few things slow you down as quick when cycling on the open road.

The section from Randalstown to Toome had stirred thoughts of the proposal for a greenway linking the two towns, with the former railway trackbed within sight on the Randalstown viaduct and near Toome itself. While the country roads were quiet and a delight to cycle, the tourism potential of a continuous quality greenway path closer to the shore with spectacular views and no worries about traffic really appealed. Who knows, in future years Lap The Lough might make use of a future greenway as part of the route?

I stopped late in the day for a water top-up from my pannier bag, and a silver van pulled up. The urban cyclist is naturally wary in these situations. I was mightily impressed when the driver shouted “Are you okay, need any help?” Seeing the cycling livery on the side I realised it was a support vehicle checking up on what appeared to be a stricken participant. It was great to feel looked after.

Incredibly, instead of struggling towards the finish, my legs retained their strength. They felt no worse than they had at the 30 mile mark. I started to count down the remaining distance in terms I could better grasp (3 Comber Greenways, 2 Comber Greenways..) and with power still at my disposal, it was fantastic to realise the full distance was now possible. My legs were answering questions I hadn’t dared to ask them.

After the 75 mile mark it was back to country roads again and a more boggy landscape as I looked for more signs that Peatlands was close. I even dared a little sprint to see what it felt like after such a long ride, although I didn’t hold it very long! The dismount and walk over the River Blackwater felt like a timely and necessary stretch for tired legs, and with less than 5 miles to the finish I resolved to burn the energy reserves with some celebratory speed. Rounding one corner I was faced with someone standing dressed in a gorilla suit, clearly there to test everyone’s sense of reality, and fair play to him/her.

I rolled past the finish line at 4.15pm, which I wouldn’t have dared to think about before the event. Excluding the three stops (is that cheating?) it was bang on a 13mph average. An ice cream van was the first thing to greet me, so a 99 poke was a well-deserved treat. The organisers gave everyone a lovely Lap The Lough cap and laid on themed refreshment at their wrap party. From start to finish the whole event was executed with style, spirit and professionalism – no doubt honed from the experience of seven previous Laps. Everyone involved behind the scenes at the event deserves immense credit.

Would I do it again? The early bird sign-up for next year can’t come early enough, and I highly recommend others to give it a go. With a Lap time posted it’s a personal benchmark to better next time, and a chance to rope in some friends and have another day’s craic on the bike. Two thousand people taking in some amazing local scenery, raising money for charity, just getting out into the countryside and enjoying riding a bike – Lap The Lough was Northern Ireland at its best.