One of the benefits for Belfast of the 2014 Giro D’Italia Grande Partenza is the increasing talk of leaving a cycling legacy for the city. We already have Belfast Bike Hire on the way, and many have been surprised by the rapid rise of the Gasworks Bridge to the forefront of DRD policy in Belfast. But Belfast could signal its serious intention to accelerate cycling development by pitching to host the Velo-city cycling conference in 2017.

The Velo-city conferences, organised by the European Cyclists’ Federation, are an international platform to address decision makers to improve the planning and provision of infrastructure for the everyday use of bicycles in urban environments.

“The conferences typically bring together more than 1,000 delegates such as engineers, planners, architects, social marketers, academic researchers, environmentalists, businessmen/women, and industry representatives who join forces with government at all levels in order to build effective transnational partnerships to deliver benefits to cycling worldwide.” :Velo-city 2013 website

The most recent Velo-city conference took place in Vienna in June 2013, and was the largest event to date with over 1,400 delegates from across the world. This gave some good people on Twitter a fantastic idea for Belfast! Velo-city runs every year alternating between a global conference and a European-focused event. Adelaide will host Global Velo-city in 2014, followed by Nantes in 2015. Applications for the following European leg in 2017 will open next year, giving Belfast ample time to prepare a bid. A 4 day multiple-venue conference bringing over 1,000 influential delegates from around the world to Belfast? There’s a very straightforward economic case if nothing else. 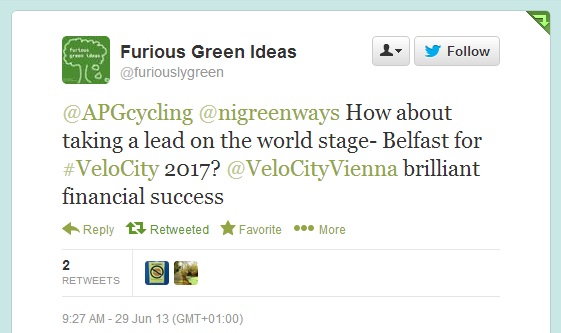 Certainly Belfast’s profile as a conference city is growing, with the Visit Belfast organisation at the forefront of conference promotion and support. The city boasts an amazing range of unique venues for larger keynote sessions, business expos and smaller side events.

While sometimes seen as being on the periphery of Europe, Belfast has a unique and fascinating history and attractions for visitors. From the Troubles to Titanic, world famous night-life and the blossoming local film and television industry, Belfast is regularly recognised as one of the top world destinations for tourism these days. While Belfast’s cycling levels are currently very low, we’re seeing observable increases each year to back up census data on commuting rises. The city’s growing greenway network is a fantastic resource which could be better promoted as a draw for tourism. We have a flourishing group of cycling activists and pro-active organisations fighting for a better deal for budgetary intervention from the Northern Ireland Executive.

We also have a pleasantly engaged city council working to improve Northern Ireland’s major urban centre into a more liveable city, which is still emerging from conflict. A recent award-winning paper from QUB on local cycling policy points both to the historic and physical barriers to cycling, but also a major political barrier to city development – transport planning and road infrastructure is a centralised government function in Northern Ireland, and Belfast City Council has no real power. Should Belfast City Council lead a bid for Velo-city, it could be an important stepping stone to wresting more influence and control of local transport policy in Belfast.

We already have some great stories to tell about cycling; our place in history as the birthplace of modern cycling through John Boyd Dunlop’s first successful development of the pneumatic tyre; our present with a population beginning to wake up to cycling as transport and dealing with the growing pains every day; our future hopes for a better city accessible to everyone and with cycling given real space to grow. Velo-city Belfast 2017 could act as a beacon for a new Belfast.